The Park Wine Bar in Harlem is coming together, construction photos released 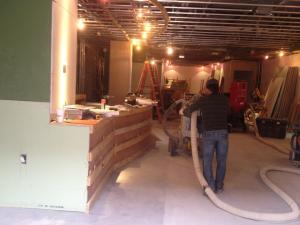 Back in June 2012, HarlemGal Inc exclusively announced that The Park Restaurant & Wine Bar was coming to Harlem,

specifically on Frederick Douglass Blvd. The Park Wine Bar aims to be Harlem’s first and only self-serve wine bar on restaurant row. According to recently released photos by the upcoming Harlem business, that goal is moving toward reality. The floor has been set and so has the structure of the bar. The photos also gives the appearance that this drinking and dining establishment will be spacious-similar to Harlem Tavern and Corner Social. Those Harlem places are large and can hold a lot of patrons. Looks like The Park Wine Bar in Harlem plans to do the same.

One response to “The Park Wine Bar in Harlem is coming together, construction photos released”