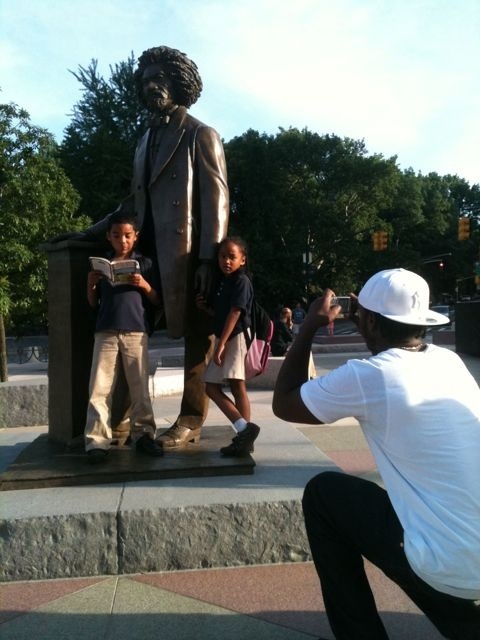 Here is the official news release from NYC Parks and Recreation on the Frederick Douglass Circle Dedication tomorrow, Sept. 20 T 11 a.m. The agenda items posted last week about this event here on this site were correct! Take note, no Mayor Bloomberg, but Rep. Charlie Rangel will be present!

FREDERICK DOUGLASS MEMORIAL TO BE DEDICATED

Performing at the dedication ceremony will be members of the IMPACT Repertory Theatre, the Harlem School of the Arts, and Tony Award nominee Andre DeShields who will recite excerpts from “Oration In Memory Of Abraham Lincoln,” originally delivered by Frederick Douglass on April 14, 1876 at the unveiling of the Freedmen’s Monument in memory of Abraham Lincoln.

DETAILS: This memorial located at the northwest corner of Central Park honors the African-American abolitionist, orator, writer and statesman Frederick Douglass (1818-1895), and consists of an eight-foot bronze portrait sculpture by Gabriel Koren, and a large circle and fountain with ornamental and symbolic features designed by Algernon Miller.

In the mid to late 1990s, a series of community-based design workshops organized by the Central Park Conservancy led to the NYC Department of Cultural Affair’s Percent for Art design competition for the circle. In 2003, the competition was won by a collaborative proposal submitted by Harlem-based artist Algernon Miller and Hungarian-born sculptor Gabriel Koren. Miller is also known locally for his Tree of Hope sculpture dedicated in 1972 on Adam Clayton Powell Boulevard. Koren has sculpted the Malcolm X Memorial statue located at the site of the former Audubon Ballroom, where the civil rights leader was slain.

For the Frederick Douglass Memorial, Miller’s overall design includes granite seating and paving patterns based on traditional African-American quilt motifs, as well as a bronze perimeter fence with a wagon wheel motif. He also responded to the design competition guidelines with a bronze water wall depicting the Big Dipper constellation that guided those on the “underground railroad.” Koren crafted a standing bronze portrait of a pensive Douglass, cast at Polich-Tallix bronze foundry, and inspired by nineteenth-century photographs.