Where to purchase a Harlem tee? 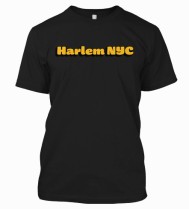 The largest Harlem online community on Facebook known as Harlem NYC recently started to sell unisex t-shirts that say…what else, but Harlem NYC on it. Go here to purchase a t-shirt for $12.50. To get that price, more than 50 t-shirts have to be printed.

On twitter, several followers have told HarlemGal that a site called Harlem Lives sells men and women t-shirts that say Harlem on it. And apparently, there is a sale going on at this site according to a follower. Harlem Lives tees run from about $19 to $25.

Harlem Underground offers consumers the opportunity to buy Harlem t-shirts online and in stores as well. Harlem Underground has two locations. Their first is on 20 East 125th Street. And recently, they opened their second store in Harlem on Frederick Douglass Blvd between 119th Street and 120th. Harlem Underground tees cost from $16 all the way up to $30.

Harlem t-shirts are also offered in stores only at Swing Concept and Bebenoir in Harlem. And let’s not forget along 125th Street. Street vendors sell Harlem t-shirts for as low as $10!

If there are other places to purchase Harlem t-shirts, drop us line here in the comments section!

4 responses to “Where to purchase a Harlem tee?”