According to The New York Observer, Harlem is getting a “secret agent.” Well, actually Fifth on the Park is. Apparently, Glen Sergeon Jr., who got him dubbed the “Secret Agent” by Forbes magazine back in May has said goodbye to his Greenwich Village penthouse for a three-bedroom apartment in the condo tower Fifth on the Park. Records show that the Secret Agent himself paid $1.42 million for his new place on the 20th floor of the 28-story building located near Marcus Garvey Park at 120th Street.

The article mentions that Fifth on the Park is the tallest apartment building in Harlem and the Secret Agent’s “new 1,884-square-foot home offers all the modern amenities, such as state of the art kitchens with granite counter tops, washer/dryers, central air conditioner and heating systems, cherry wood floors, oversized windows, 9 – 10′ ceiling heights, marble baths with soaking tubs and custom closets.” And the Secret Agent is getting a deal. There are almost no taxes to pay, due to the 421-a program.

Hope the residents at Fifth on the Park are excited about having a “secret agent” living in their building. Maybe they will dub him the James Bond of Harlem? 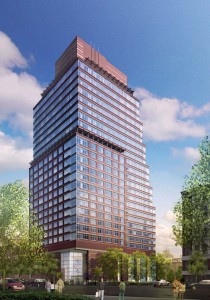