Recently, I blogged about how some condos in Harlem were meeting their mark in terms of sales. There is another condo development that has achieved similar success. The Gateway Towers, located at 2098 Frederick Douglass Blvd. and also known as Gateway Condominiums, is 70 percent sold. I have confirmed this with two sources. There are only a limited number of properties left in this two-phase condo development.

I am surprised by this figure. It took a while for the Gateway to be completed. One would think buyers would just forget about places that take forever to be finished. However, this is not the case when it comes to New York real estate. There seems to be about 12 apartments left on the market according to Streeteasy.com. My guess is the apartments on the upper level of the tower were snapped up first and then the lower level next. The apartments on the higher floors have unobstructed views. The rooms are also big and spacious and like most new developments, the Tower has washer and dryers in the apartments.

The 70 percent sales were also probably achieved due to location and the rooftop views I have been on several rooftops in Harlem, such as The Douglass, 2280 FDB, Parc Standard, Fifth on the Park and Livmor. However, Gateway Condo has one of the best rooftops in Harlem. It has a clear shot of Central Park and Morningside Park from the roof. Also, the view of St. John the Divine is just that…divine. The view of East Harlem is nice as well. That view offers seeing brownstones from overhead.

I had the opportunity to take some photos from the rooftop at Gateway. I could not resist. When the real estate agents show the apartments, they take visitors up to the roof. Hopefully, these photos give you a sense of why the roof at Gateway Towers is one of my favorites! 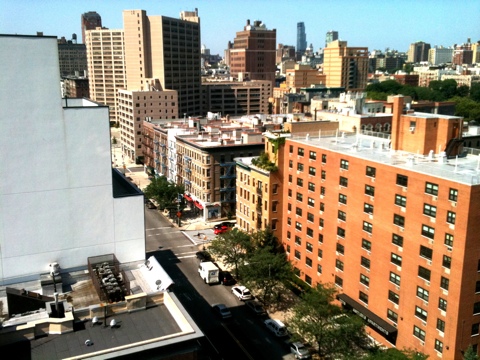