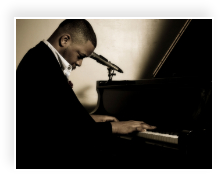 This has got to be the best news I have read any Saturday morning. Nola.com, a Louisiana publication, is reporting that Davell Crawford, a musical sensation from New Orleans and dubbed ‘Prince of New Orleans,’ is opening up Davell Underground, August 11, in Spanish Harlem. Davell Underground will be “a new performance space in a former storage room within The Kiosk, a Moroccan restaurant and hookah joint located at East 116th and Park Avenue. This location is right by Urban Garden Center and La Marqueta!

Crawford tells Nola.com that “I don’t want to call it a ‘club.’ It’s a ‘room. We will have great music there for as long as the people of New York want to accept it, and as long as I can keep it rolling.”

This Harlemite will accept Davell Underground. Count me in. I will be there in Spanish Harlem, August, to listen to music from New Orleans! Yeah!