Harlem has another neighborhood association in The North Star 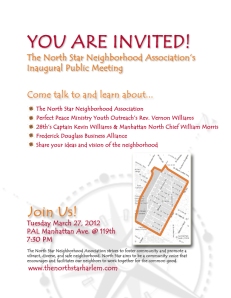 If you are interested in learning more about North Star click here or interested in participating, they are having their inaugural meeting Tuesday, March 27th at 7:30 PM at the Harlem PAL, located at 441 Manhattan Avenue near West 119th Street.