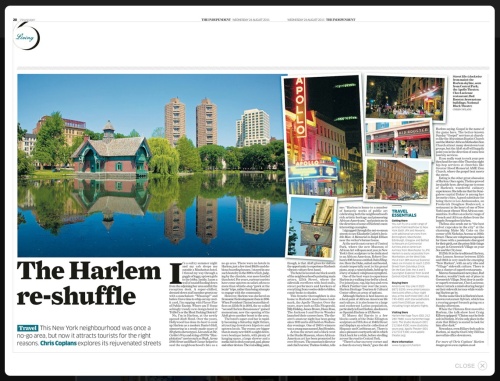 Our beloved Harlem is featured bright and big again in the media, but this time in the UK’s travel section of The Independent. According to the article the reporter/ photographer visited Harlem recently and took direction from Thelma Golden, the Director of Studio Museum Harlem, on what to see in Harlem.

Per Golden’s instructions, Chris Coplans stayed at The Aloft Harlem and he raves about it in the article. He also went to the Apollo Theater, El Museo del Barrio, Studio Museum Harlem, and more. Golden encouraged the reporter to visit the Duke Ellington sculpture and to try Senegalese food at Les Ambassades.

What’s interesting about this article is the reporter covered a lot of Harlem ground-from East to West. He also gives Lenox Avenue big props by saying, “If 125th St is the traditional Harlem, then Lenox Avenue between 125th and 126th is very much the emerging “New Harlem”, with an arty vibe and “Village” sidewalk culture.”

To read the full article, click here. To see additional photos on Harlem from the reporter, go here.