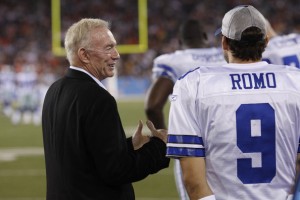 The New York Post reported yesterday (January 3) in their Page Six section that Jerry Jones, the owner of the Dallas, Texas Cowboy Football team, dined in Harlem this past Sunday before the big game, which they lost to the New York Giants. Jones dined at long time, Harlem establishment Melba’s Restaurant, located on the southwest corner of 114th Street and Frederick Douglass Blvd., for some good luck. Jones wanted specific southern dish items, i.e. black-eyed peas and collard greens, but apparently did not get what he wanted. Melba’s was out of those items (wink, wink). I guess this explains why Tony Romo was sacked a couple of times during the game. Jones did not get to eat his lucky meal.

On a personal note, I actually wish I would have seen the Cowboys owner in Harlem myself for a pic! I would have scored major points with some members of my family. I have several family members that love the Cowboys. Next time they visit me in Harlem, how much do you want to bet they’re gonna want to eat at Melba’s?  Why? Cause the food is darn good, try the catfish…and Jerry went there.