To shake up the usual outdoor theatre fare offered in NYC, Elephant Run District is presenting Brecht in the Park for the month of July in Central Park North. Brecht in the Park is three short plays, which will include The Elephant Calf (1926), In Search of Justice (1938) and The Exception and the Rule (1929). Each of the three short plays is connected by the motif of a courtroom drama, where society’s rules are examined and one is judged based on those rules.

Performances are Saturdays and Sundays starting July 6 to the 28th at 4 p.m. (no-show July 13) near the southeast corner of the Great Hill in Central Park. Admission is free to all performances. Donations will gladly be accepted. Take the subway C, 2 or 3 trains to 110 Street.

The organization is partnering with bier international in Harlem at 113 Street and Frederick Douglass Blvd. Bier’s chef is creating special pre- and post-show menu items to serve at the restaurant.

For more information about this event go to www.elephantrundistrict.org.

Harlem to celebrate Second Annual Food and Drink Boulevard May 2

The Frederick Douglass Boulevard Alliance and Experience Harlem invite us all in Harlem to their annual Food and Drink Blvd event, which is an evening of food, cocktails, music, and culture featuring most of the dining establishments on Harlem’s restaurant row, aka Frederick Douglass Blvd. The event takes place Thursday, May 2nd, from 6-10 pm. The cost to attend is $10 in advance. To purchase tickets for this fun event, go here. 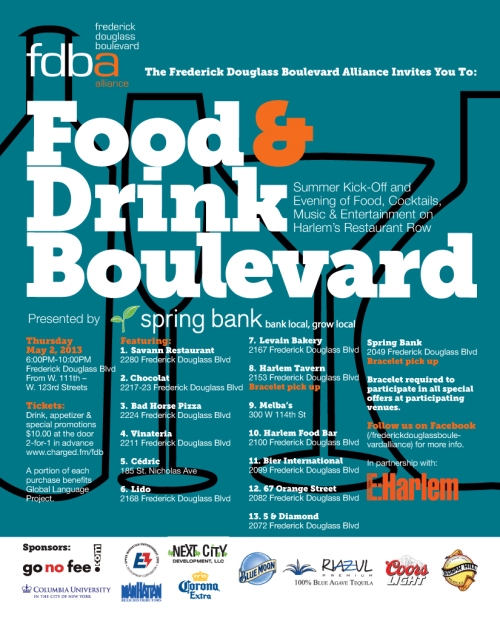 Bier international is doing things a little differently for Valentine’s Day. Tomorrow, Feb 14th, bier international is inviting everyone over, with date or without, to Afro Funk Night. If you feel like taking a journey to the music of the African Diaspora by DJ Jeremiah, head on over tomorrow to bier international at 2099 Frederick Douglass Blvd., between 113th and 114th Street. Music starts at 8pm to 2am.

Harlem’s restaurant row, aka Frederick Douglass Blvd between 110th and 125th Street, is back in the news again. The New York Times recently

spoke with Leon Ellis, the owner of Moca Lounge, Chocolat Restaurant and Harlem Underground, about how this part of Harlem has gone through a complete transformation since he first opened Moca, which was back in 2003.  Ellis told the NY Times that his friends thought he was crazy for opening up a restaurant back then. Since 2003, Ellis has expanded his business presence in Harlem on FDB with Chocolat opening about two years ago and then Harlem Underground, a Harlem-themed clothing store.

The owners of bier international were also interviewed for the article and stressed that while this area is going mainstream, they emphasized “we need to find a balance and not forget what was here” in Harlem.

Yesterday afternoon, Grub Street, New York Magazine’s blog, posted about the bars to bottoms up at in East,Central and West Harlem. Some of the establishments mentioned are no surprise that they made the cut, such as Ginny’s Supper Club, 67 Orange, bier international, Harlem Tavern, Corner Social, etc. What is a surprise is that Grub Street mentions some great places to check out in East Harlem, new places, and along Adam Clayton Powell Jr Blvd that rarely get mentioned but deserve the recognition, such as Shrine (very fun place in my view), Harlem Public, its brand new, and The Duck, who wouldn’t want to head to East Harlem and drink at a place that’s named ‘the duck.”

Where Grub Street misses the mark is naming Harlem Lanes. Isn’t that place closed? Clearly whoever wrote the blog post has not been to Harlem or did not do their research or Harlem Lanes is not closed.

It’s a comprehensive bar list by Grub, but Harlemites know best. Tell us if Grub overlooked a particular drinking establishment or if they got it right!

Harlem Tavern reaches one year mark, a look back in photos and blog posts

More than 12 months ago, the northwest corner on 116th Street and Frederick Douglass Blvd in Harlem was an abandoned gas station locked up in jail-like bars. Does anyone remember how this corner looked back in the day? Fast forward to today, this corner in Harlem is now a bustling section, decorated with red outdoor umbrellas, filled daily with Harlemites, who are dining inside or outside, and it’s now the permanent home of Harlem Tavern, the second beer garden to open in South Harlem after bier international.

Can’t remember how Harlem Tavern came together and reached its one-year milestone? No worries. Let’s wish Harlem Tavern happy anniversary by reflecting back in photos  and with some popular blog posts. Cheers!

Harlem couple invest in where they live creating Harlem Tavern-August 20, 2010 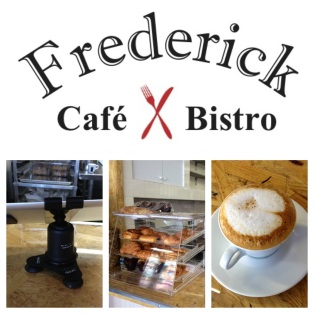 I went by Frederick Cafe Bistro this morning (June 22) to get an iced latte and a blueberry muffin, and found out they take credit cards as another form of payment. I assumed the cafe only took cash because it is under the same ownership as bier international, which I believe they only take cash, so this was a nice surprise this morning to find out I can use my credit card at Frederick Cafe Bistro!

If you haven’t stopped by Frederick Cafe Bistro, it’s on the southeast corner of FDB and 114th Street! They offer delicious coffee, pastries and pressed sandwiches!

If you like the product and services at bier international in Harlem, i.e. great food and beer selection, then you’re probably gonna want to check out their next place of business in Harlem when it opens, which is Frederick Cafe Bistro. The second Harlem business for bier international will be located on the corner of…you guessed it, Frederick Douglass Blvd and 114th, and Chris and Ousmane, co-owners of bier and now Frederick Cafe Bistro, are working around the clock to get the Cafe up and running. The owners are aiming for late April to open the corner bistro. Also, their logo is ready! That’s a promising sign that an opening date is near!

As for the menu, there is no word yet on what will be offered. However, I have complete faith that Frederick Cafe Bistro will be a hit in Harlem. Why? Chris and Ousmane have done a fantastic job with bier international. That place has been hopping since day one of opening and hasn’t slowed down since. I see the results with my own eyes. I walk by bier practically every day.

Furthermore, I will put the success of bier international into baseball terms. Chris and Ousmane hit the ball right out of the park with opening bier in Harlem. They got it right and I have no doubt their business model for Frederick Cafe Bistro in Harlem will be executed with the same level of detail and energy as they did with bier international. The only problem I foresee happening-and Harlemites might agree-is deciding where to hang. Am I  in the mood for bier international or Frederick Cafe Bistro? Ahh, decisions, decisions! That’s what I call a good problem!

It is that time of year again…where Harlem Park to Park presents Harlem Restaurant and Retail Month for the month of March! Starting March 1 and running to March 31, a select group of Harlem businesses will be offering prix fixe menus and select retail items all for $20.12. Check out the list below and head on over to your favorite Harlem hangout this month for Harlem Restaurant and Retail Month!